I have been trying to get to the Bahamas with my friends Billy and Sierra for years. They live aboard a self restored 42ft catamaran Adrinaline with their awesome rescue dog Jetty. They run a You-tube sailing channel "Tula's endless summer" which is hugely successful and have an online store where they sell lots of cool ocean and sailing inspired items. They left Florida last week on an adventure that will take them all the way to Granada and this was my chance to catch them before they got to far away! They will sail nearly to the tip of South America by July to avoid the hurricane season, their destination beyond that is unknown , what an adventure! 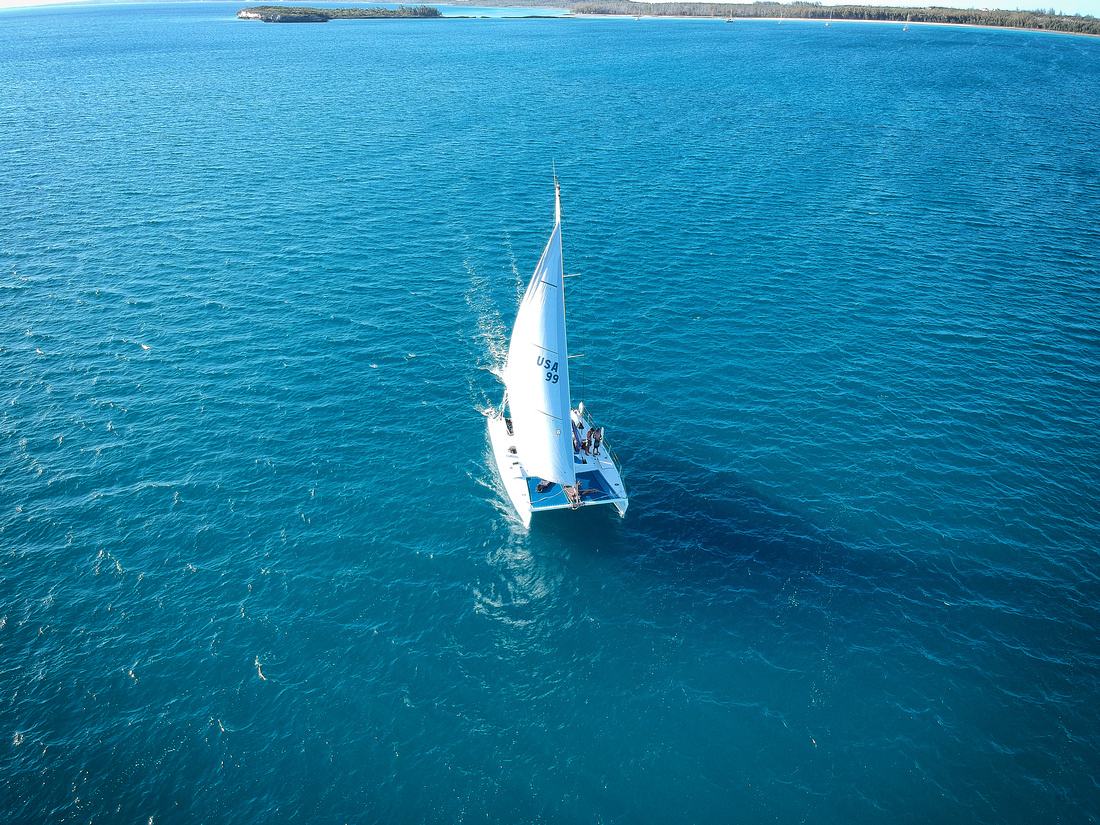 The 2nd day of the trip greeted us with a late season cold front which meant off shore winds and surfing! We timed it perfectly and arrived at the beach just as the rain ended and caught perfect chest high glassy waves, I made the mistake of surfing first and waiting to shoot, so the winds had shifted by the time I swam out, but it was awesome to surf with friends and and only two locals out.

The next day the sun came out and the winds backed off, it was time for some free diving. The mission was simple , they would search for dinner and I for images, same goal, different hunting tools:) I have tried spear fishing a few times , and overall hunting and fishing have never been my cup of tea, I would rather hunt with my camera:) It was very interesting to watch these two switch from mild mannered surfer kids, to fully tuned hunters. They have become very efficient at the game, they are often anchored in places far from a town , with the ocean their only food source. While free diving you have no air tanks, just one breath, you dive to the bottom and go into stealth mode, searching along the bottom, under rocks, ledges, and in caves. The visibility was less then stellar most days after all the wind and rain from the passing cold front so we stayed in relatively shallow water ranging from 10 to 40ft. Both of them have breath hold times of more than 2 minutes and were way more comfortable going under overhangs and caves than I was! I was def doing my best to keep up! 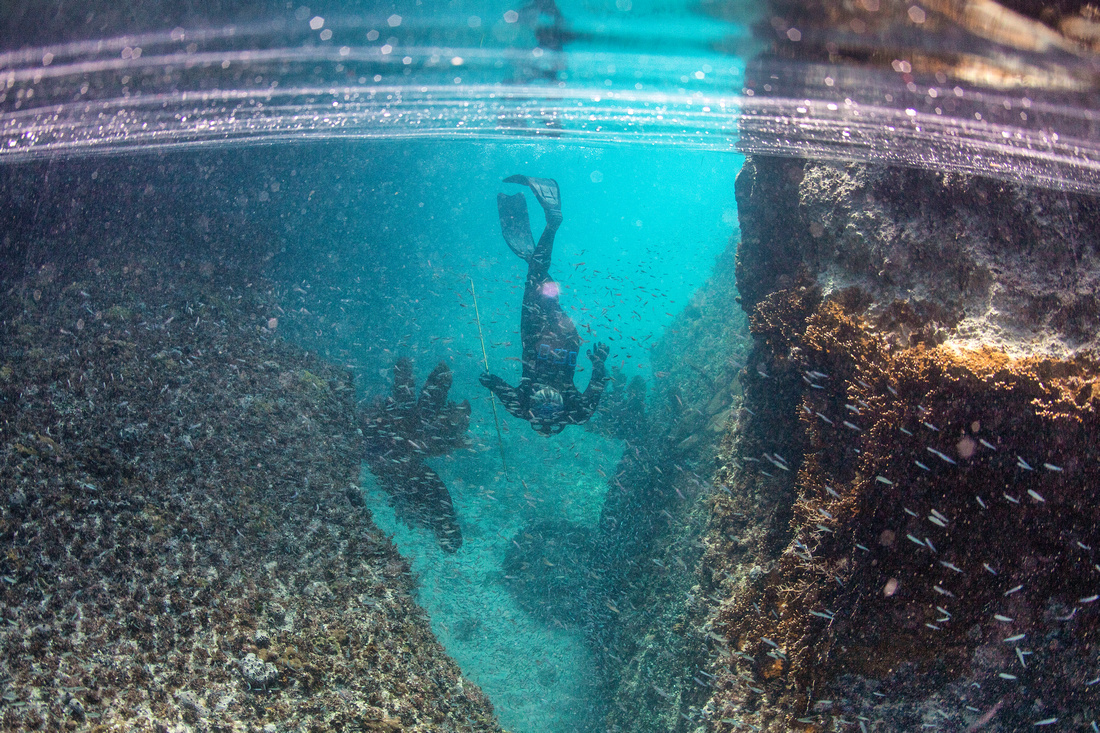 Sierra on the hunt

The first thing that stood out to me was the underwater landscapes . Eleuthera is different that a lot of the Bahama islands in that it has more cliff faces , caves , and rock formations under water. So cool to have so many places to explore! 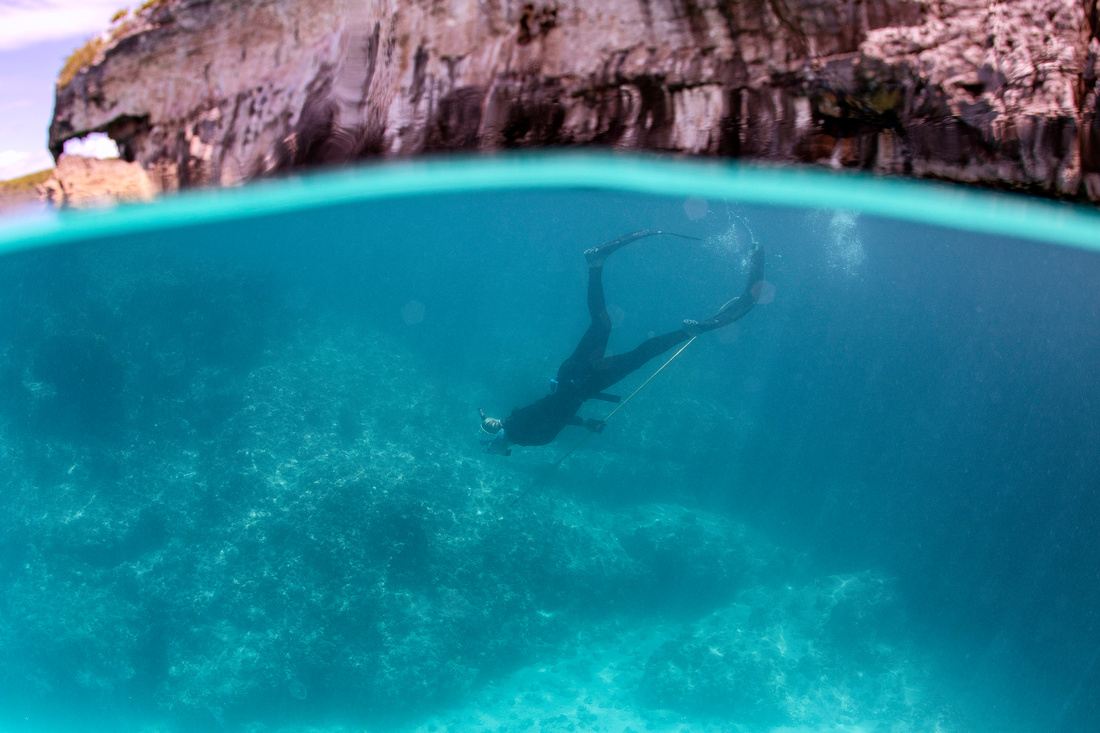 Sierra heading down along one of the many cliff faces along the Caribbean side of Eleuthera .

My main focus for imagery was to find marine life, we did spot Dolphins several times and even jumped in the dingy one evening to see if we could get a swim in with them, but all the pods we found were bottle nose dolphins who tend to not be very social with humans. We spotted several Nurse sharks over the course of the week, and saw one small blacktip shark. The main creatures I was able to photograph were different tropicals , rays, barracuda , and as mentioned the occasional nurse shark. Sierra and I actually saw one laying under a rock that was the biggest shark I have ever seen under water, had to be a solid 12ft! I had no idea they could get that big! Being mostly harmless sharks, it was still impressive! 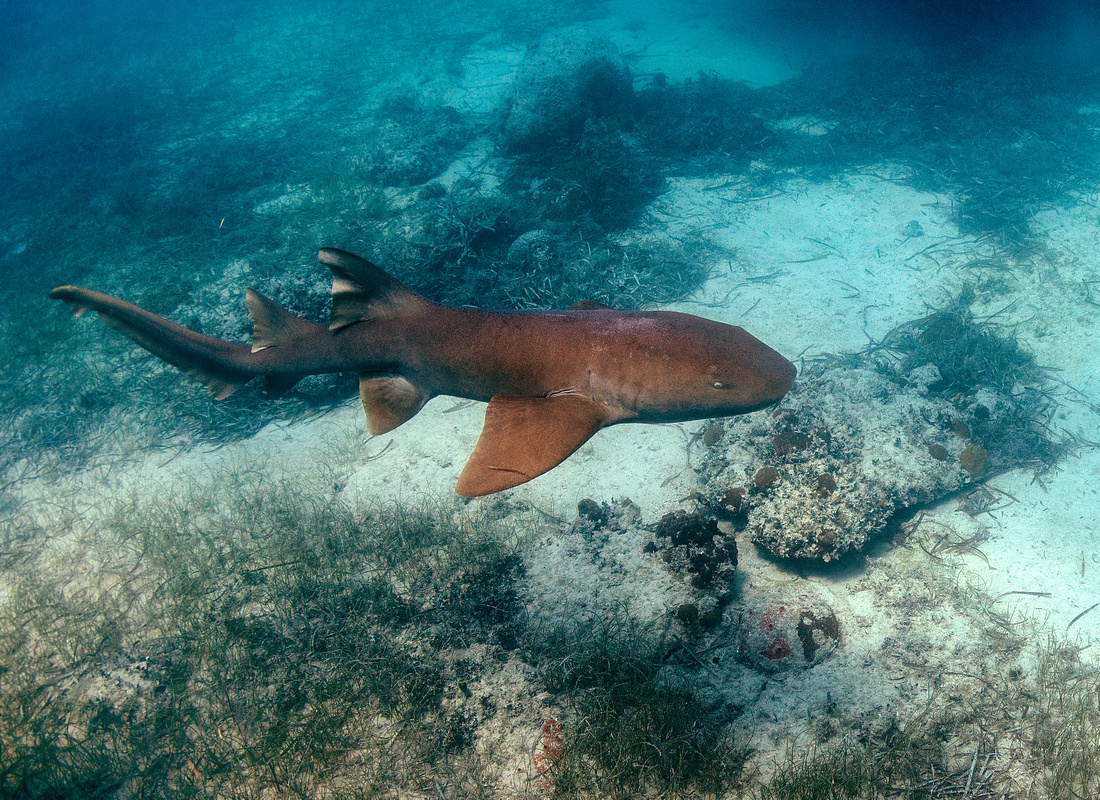 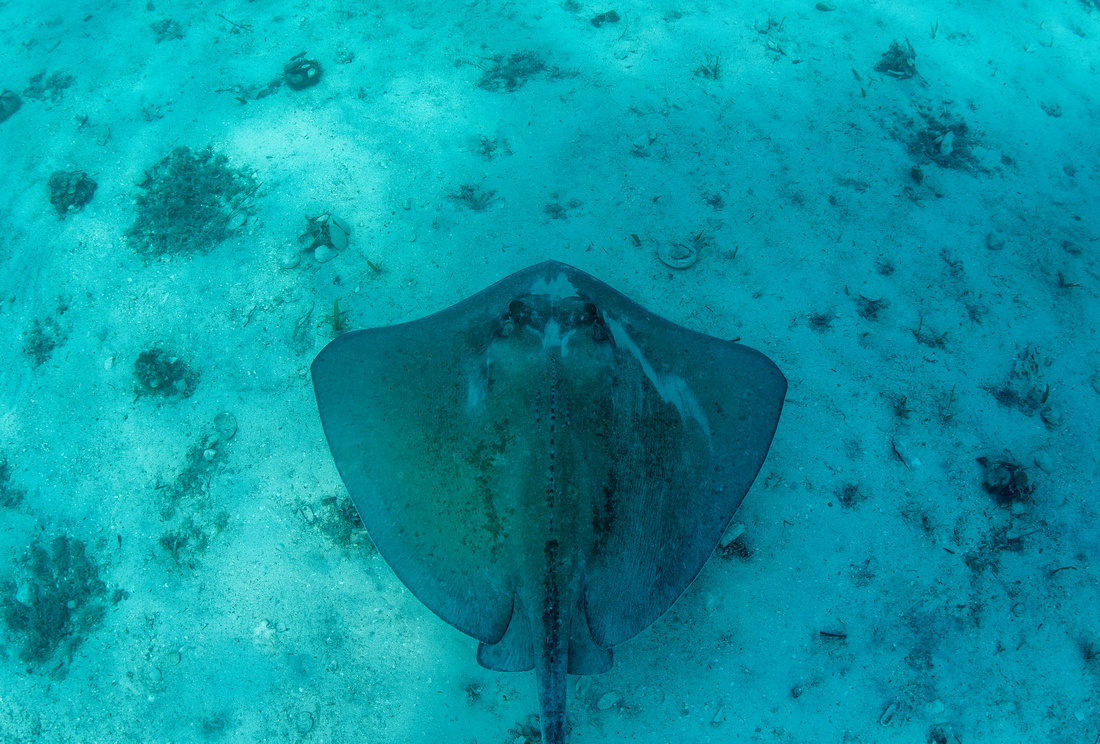 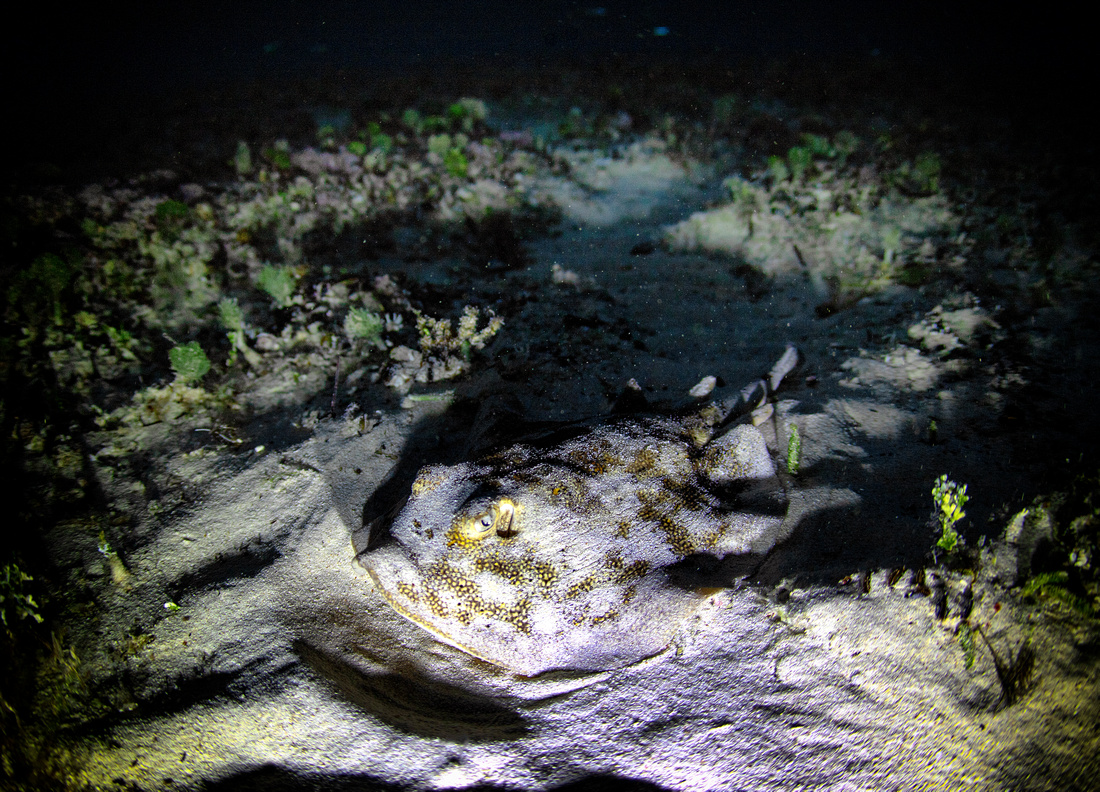 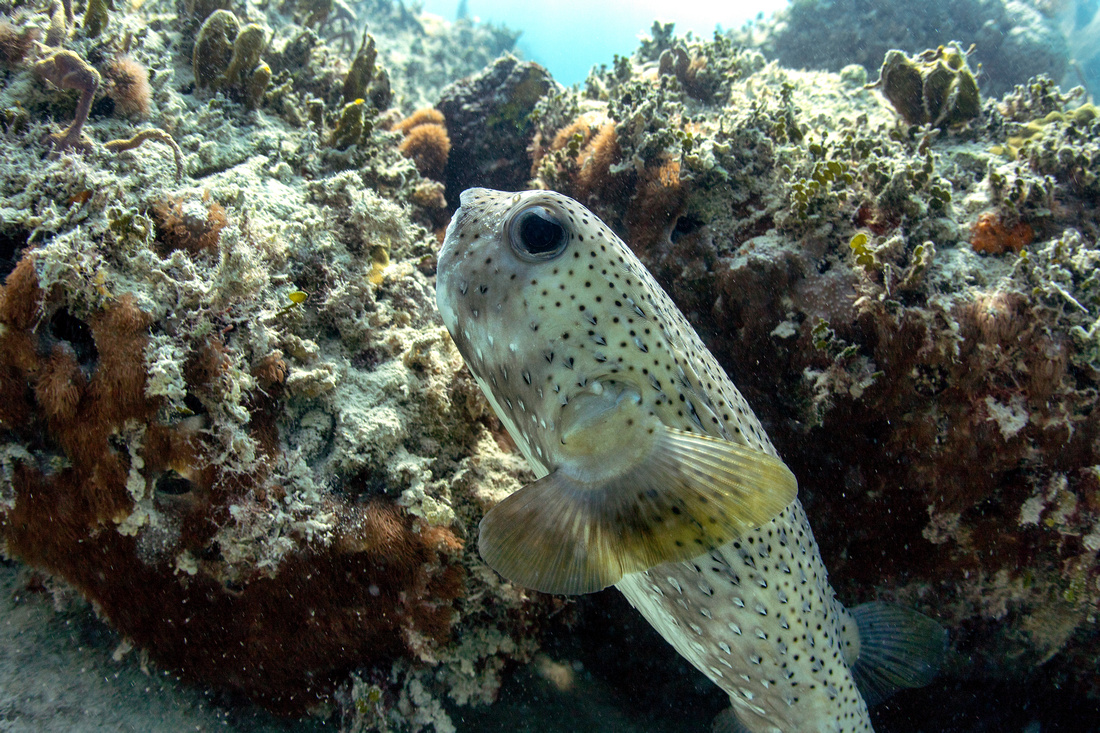 Love the "deer eyes" of the puffer fish, so cute! 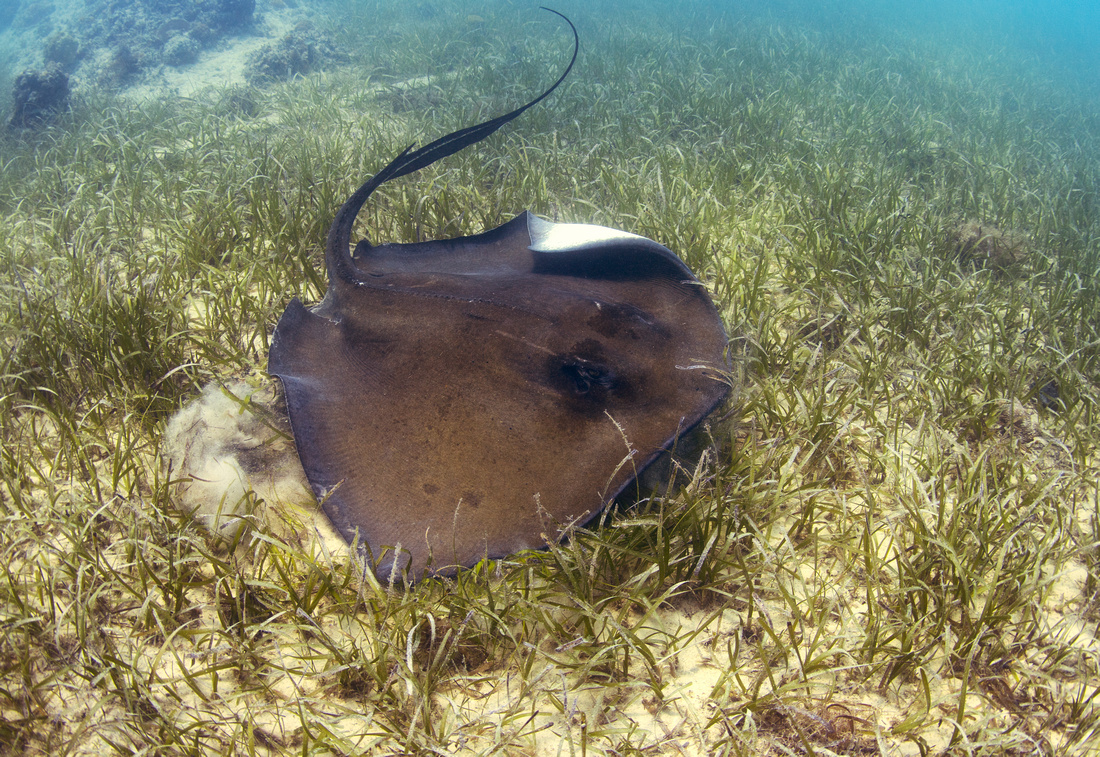 Another huge sting ray , he had enough of me and was off like a jet!

The best part about Eleuthra is the live rock! I have traveled a lot and have not seen reef like this since I was a kid. So amazing, sea fans, sponges , and several different types of coral. So cool to see a fairly functional reef system in place! Coral comprises one of the most life giving eco systems on earth . Every other breath we take comes from the ocean, and corals are the backbone of this process. Its estimated that at least 50% of corals have been lost in the past 20 years, and the great barrier reef in Australia is 80% gone. The main source of this loss is rising sea temps and ocean acidification caused by climate change. Its rare to see so much live rock in one place! Sierra who is a marine biologist was quick to remind me that although the reef looked healthy , the abundance of sea urchins and sea stars was the sign of an out of balance eco system. More work has to be done to help restore that balance , but it was still beautiful to see. 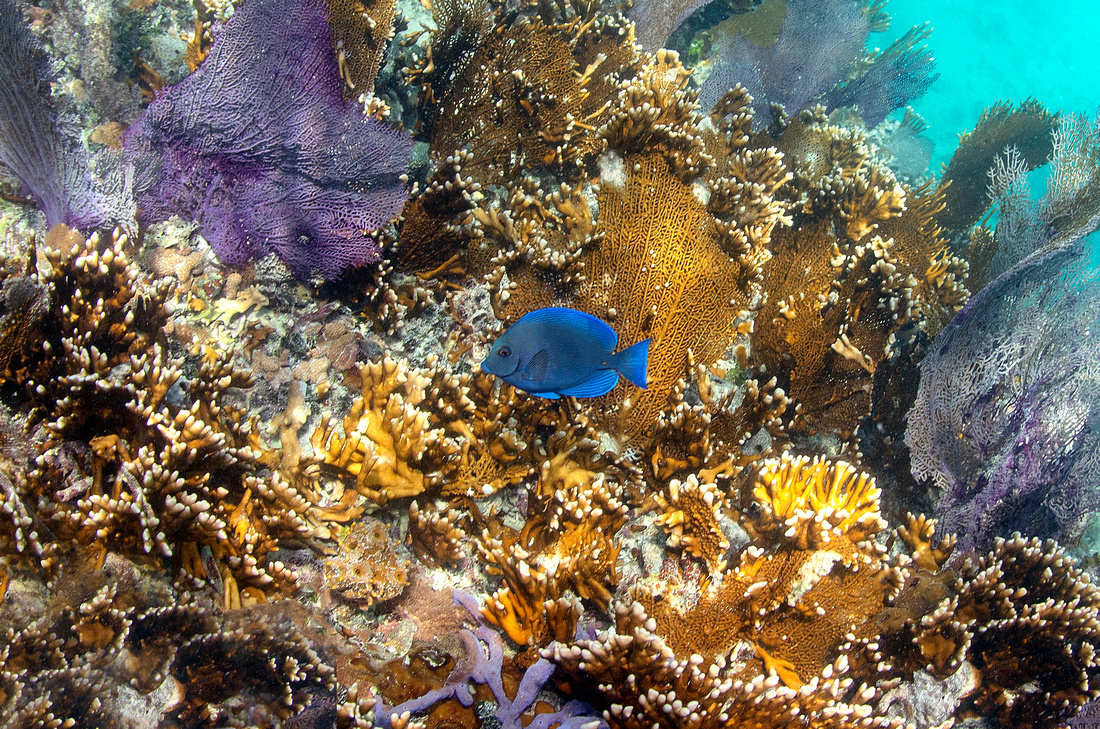 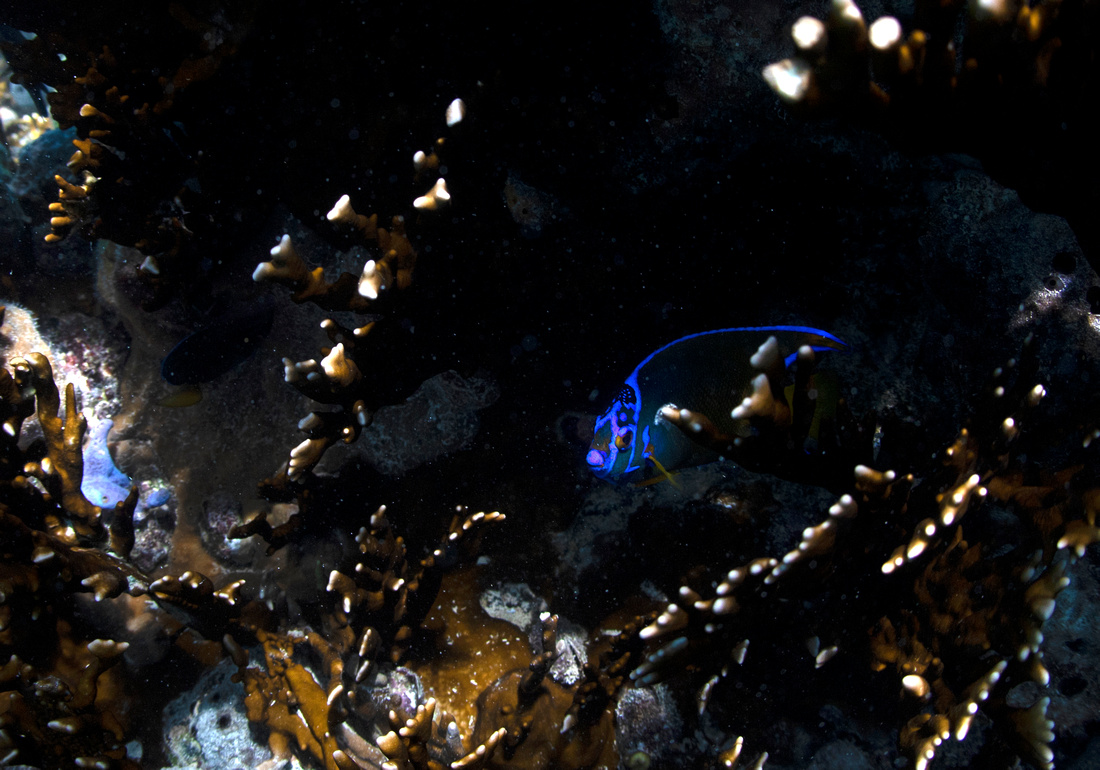 Juvenile Queen angelfish tucked away in the coral reef. 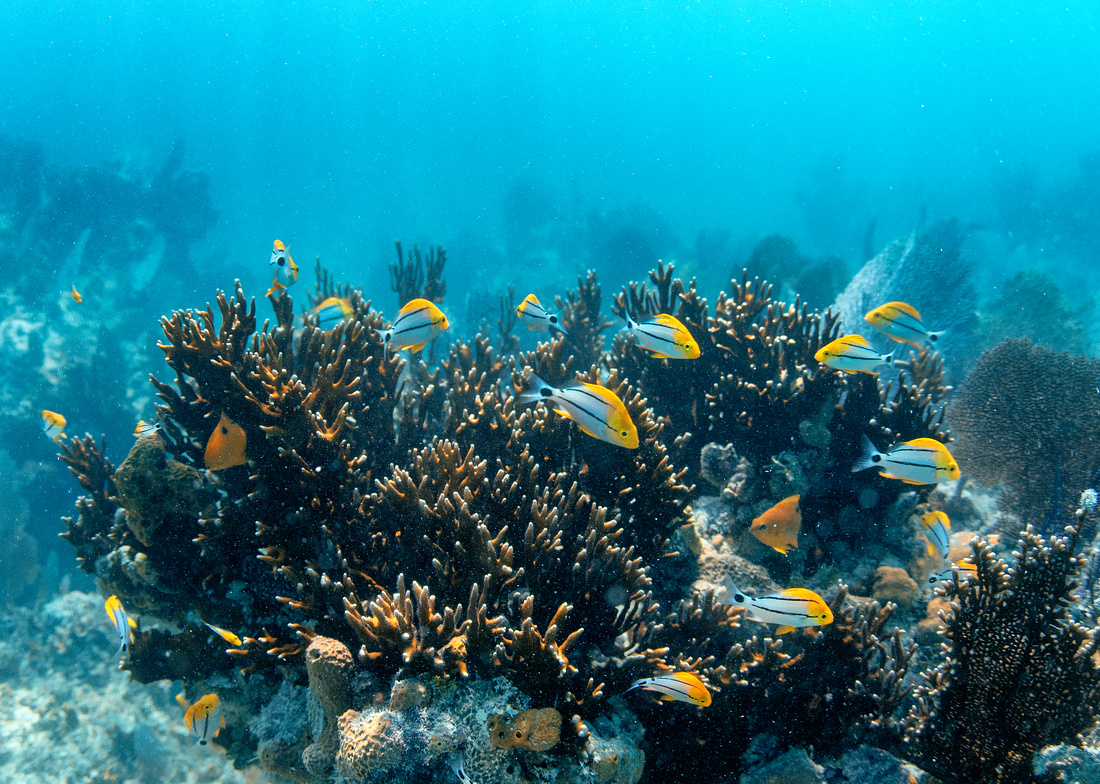 coral on top of coral! 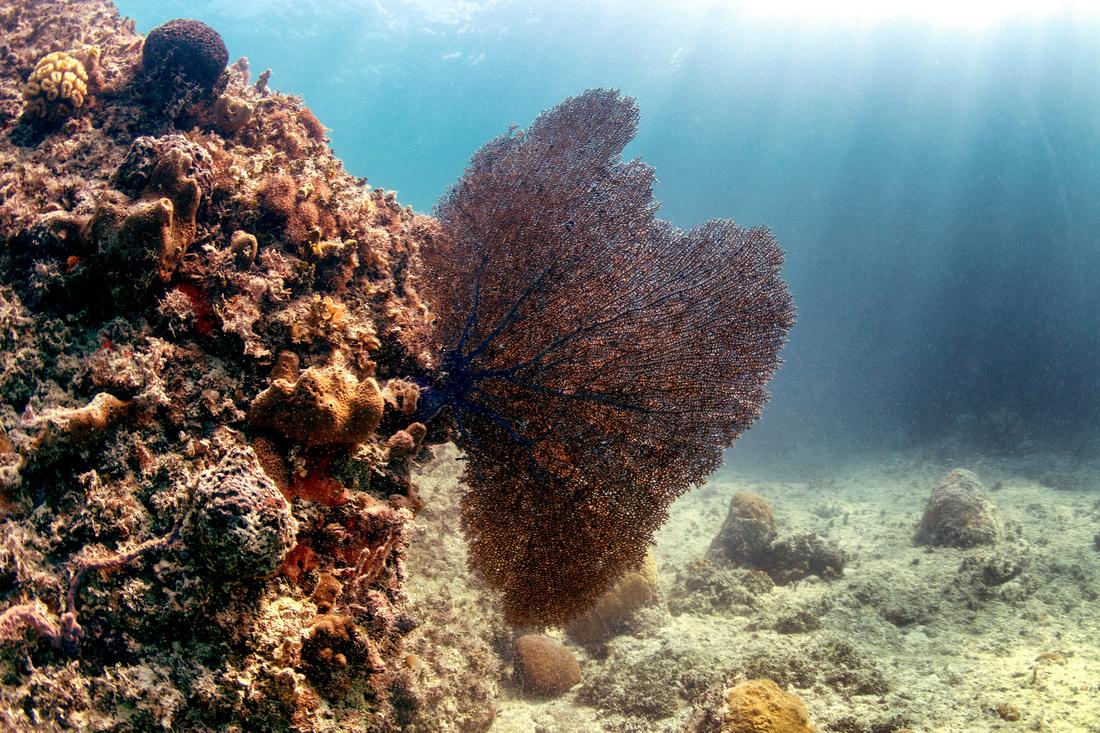 Overall it was an amazing trip. I have traveled to the Bahamas many times in the past for kitesurfing trips, but to see the underwater world here was very special! Its was also nice to experience the boat life first hand and get to peer into the lives of two kids living their dream. It was an amazing feeling to live on a vessel powered mostly by the wind and sun. There were several days that we sailed 10 miles or more with no engine power at all, straight off anchor to the next spot compleatly driven by the wind, and there were a few days I never touched land over the course of the day, very cool! Living off the grid is not easy on land, but throw in a saltwater environment , and it becomes pretty interesting . The logistics of conserving water, power, and food is not to be taken lightly. These two have it down to a science , they are bright kids, driven, focused, and passionate about living close to and in tune with nature. Such a refreshing change from the mad world and gives me hope for the rest of us!  Many thanks to these two for my time on the boat! Looking forward to hopefully joining them again as they get deeper into the Caribbean. Flat seas and fair winds my friends! 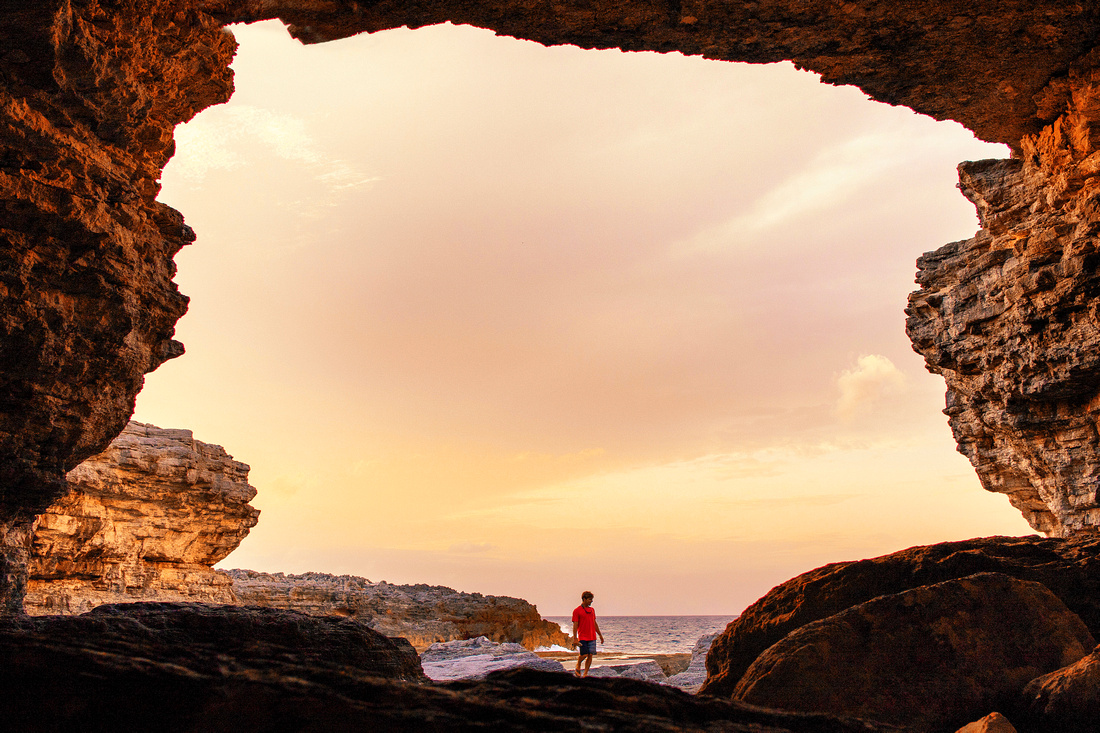 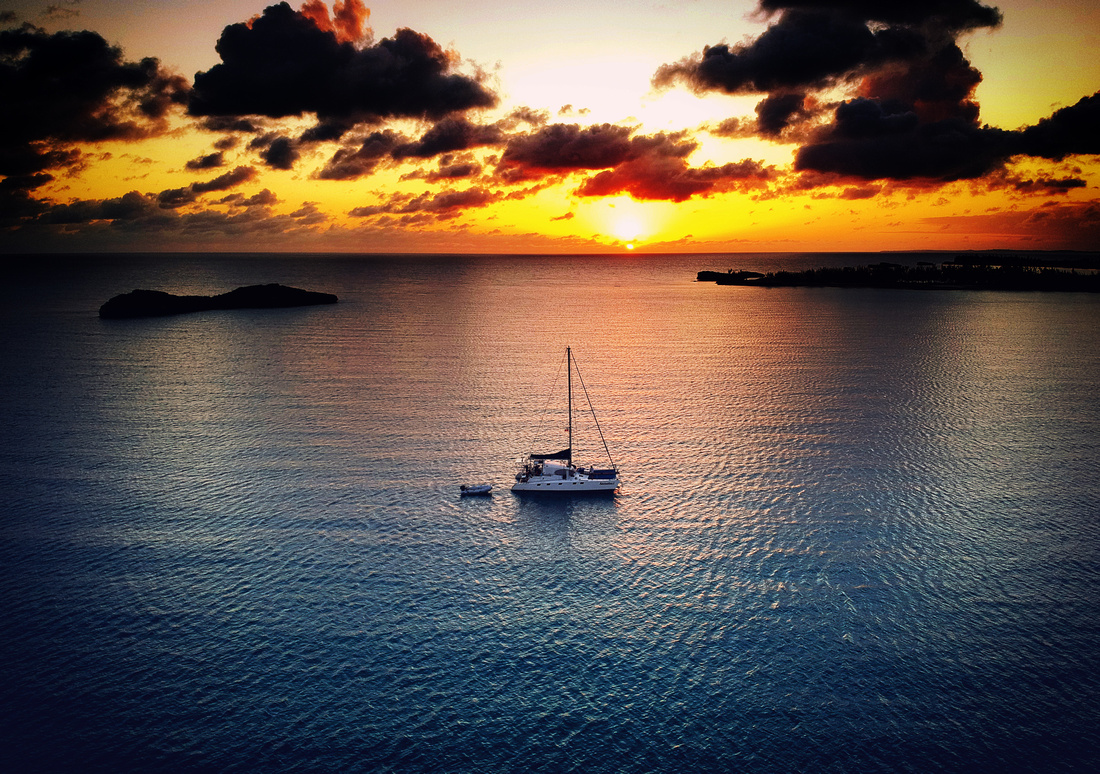